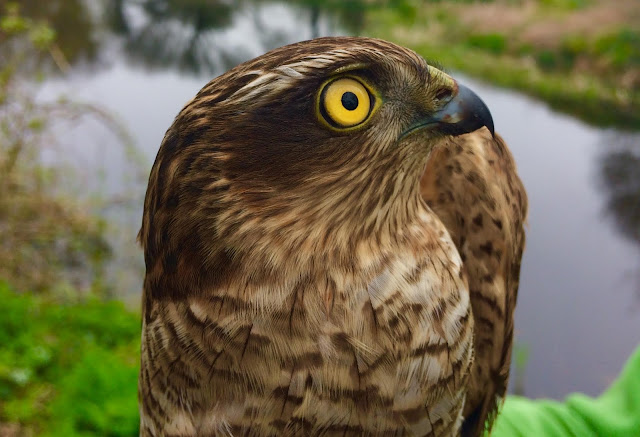 My New Year’s resolution for 2018 was to begin the long journey into learning how to ring birds. I had been out with Pete (who already has a ringing permit) on a number of occasions in the last 18 months and the ringing had really captured my imagination. Not only do you get to see birds in a  whole new light but you are able to contribute to many surveys across the country and most interestingly for me is how you are able to learn about migration and discover where birds travel to on migration and how long birds live for. I also hope in the future to be able to travel around the world and volunteer at the many bird observatories in Europe and beyond once I have my permit.

The first step into the world of ringing is to obtain a ‘T Permit ‘(a trainee ringing permit that allows you to handle birds and apply rings whilst being accompanied and mentored by a qualified trainer.) and also, I had to contact somebody who was willing to train me. I felt so grateful and privileged when I contacted Kester Wilson and he was more than happy to be my trainer and I also had the added bonus that Pete is also able to help me train (as he has a helper’s endorsement on his licence). Staying within Cornwall to learn was a real added bonus for my travelling and also ringing within the county is more interesting to me so it was a great start all round!


Annoyingly for me though was the terrible start to the year for weather we had in the South West. It seemed every time I had a day off of work it was blowing a gale and raining (meaning you can’t set nets as it would be too risky for the birds) and even when we got nearer to Spring we had the big freeze! So again, no chances to ring as it was just too cold for the birds to attempt any ringing so I spent my evenings reading through the ringer’s manual (the BTO rulebook for ringing) and learning as much as I could before I started.


Finally as April set in the weather started to change and at last I was heading to Nanjizal in the far west of Cornwall. Nanjizal Valley is Kester’s ringing site and through years of careful management he has created a paradise for migrant birds and an awesome ringing site which catches in my opinion nationally important numbers of migrant birds as they arrive from Africa in the Spring or as they depart Britain in the Autumn. Although it is an hours drive away for me (which means leaving my house before 5am to get there for first light!) I feel a special connection with this area of Cornwall as it is where my family originate from, I even drive my car along Bosistow Lane and park it at Bosistow Farm to get to Nanjizal! On my first morning I mainly watched the others and helped take notes of all the details of each bird but I was elated to ring my first two birds! A Bullfinch and a Great Tit.

I journeyed down to Nanjizal a further four times in the month and I learnt so much each time, I was even lucky enough to ring a Sparrowhawk on one occasion which was awesome! Plus, many migrant warblers including a Sedge Warbler that was at least 4 years old (meaning that it travelled… two and from Africa which I find mind blowing to be honest!). I was also lucky to be present when the ringing team processed two stunning Wood Warblers which are a very scarce migrant in Cornwall these days. I think because you spend so much time being sat or stood still when you are ringing you do also see and hear good birds from time to time and I was lucky enough to see Hoopoe, Marsh Harrier and hear Yellow Wagtails, Tree Pipits and Redpolls as they migrated through the valley. 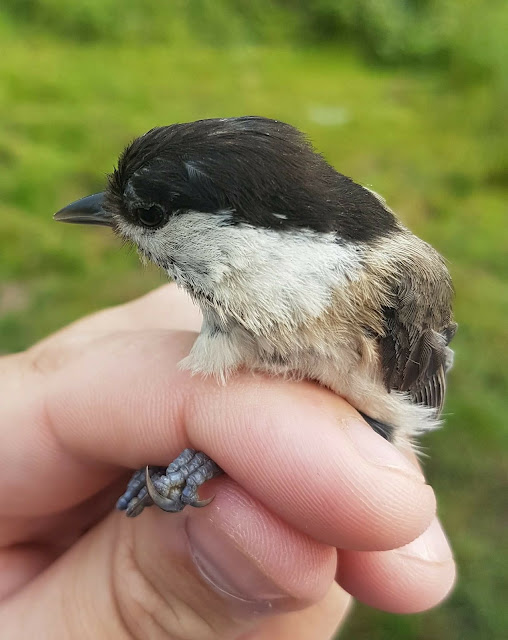 As mid- May approached it is usually the time to pay more attention to breeding birds and as a ringer you can learn a great deal about how successful breeding has been and also, I think it is the most accurate way of surveying an area for breeding birds as more birds end up in a net than you could ever possibly see or hear whilst surveying on foot. So now was the perfect time to join Pete and assist him with his Constant Effort Site on the Goss Moor Nature Reserve near Indian Queens. The Goss Moor is a huge scrubby area of land which happens to be perfect breeding habitat for many summer visitors such as Warblers and Cuckoo’s but also some scarce resident breeding birds such as the nationally threatened Willow Tit.   In the summer months Pete contributes to a National breeding Survey when he rings on his Constant Effort Site; an area of land with nets set up in exactly the same place each time, which is visited 12 times during the breeding season at exactly the same time each year. This builds up an amazingly detailed picture of how the birds are faring each year nationally and helps ornithologists build a picture as to what is happening to the birds and how well they are doing in the whole country, it really is a great idea! So far this year I’ve had some fantastic mornings with Pete and have again learnt so much thanks to him and have again seen some wonderful species but worryingly it seems that this year our birdlife is struggling more than usual. Many migrant birds have not arrived in any numbers and quite a few are in poor condition, possibly due to the very late spring we have had. Also, our resident birds such as Robins, Wrens, Goldcrests and various Tits seemed to have disappeared from large areas of the moor. I suspect that sadly many succumbed to the very harsh weather we had in February and March when the freezing conditions would have made it very difficult to survive. Birds however are very resilient and it will be interesting to see how they will do during the rest of the breeding season and already we are seeing signs of improvement since the warm spell of weather we have had with the first youngsters emerging from their nests in recent days.


The beginning of my training has been a real eye opener for me, learning to be a bird ringer takes a lot of commitment and is a tough skill to master! Rightfully there are a lot of measures put into place before you are allowed a permit of your own but there is no rush for me as every time I go out I learn something new or I become more confident when handling birds and understanding how to identify and age each species in the hand. It’s fair to say that apart from the sleep deprivation (I get up at 4:30am in the summer!) I am enjoying every minute of it!


I’d like to say a big thankyou to Kester Wilson, Pete Roseveare, Mark Grantham, Robbie Philips, Jake and John Ryan for all of their help and company of the last few months.
Posted by Bob Bosisto at 12:59 1 comment: