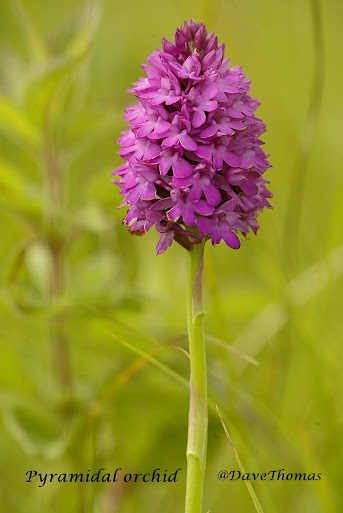 Pyramidal Orchid-Dave Thomas. Not a widespread Orchid but common where it does occur. Search during late June and July in sand dune habitats. Best sites Penhale Sands, St Gothian Sands & Trevose Head.
I have always had a passing interest in wildflowers during the summer months and in particular the Orchids. I think it's because they represent a glimpse into a time when our landscape was more sympathetic to nature than it is now, they are often visually stunning and they represent an ID challenge which all birders can relate to in a roundabout way. My fiance Libbie is very passionate about all wildflowers as well and she lists and documents the local flora and sends many records to the county recorder. Flowers are her birds and between us we learn from each other so our walks together are fun as we share our passions for nature.
During lockdown we spent many hours walking and recording different plants around St Columb Major and most excitingly we also found a colony of Early Purple Orchids and randomly a single Southern Marsh Orchid in our garden. As lockdown eased a visit to the Lizard Peninsular saw us by chance finding Green-winged Orchid in Soapy Cove and also Heath Spotted Orchid. Now with 4 species seen in the county the inner lister in me surfaced! How many Orchids are there in Cornwall? Could we perhaps see ten species in our own Kernow Orchid summer? I set ourselves the challenge as a fun thing to do and an incentive to walk whilst the birding was quiet.

Green Winged Orchid-Tony Blundon
A rare Orchid in Cornwall which can be found in Soapy Cove Valley and the Predannick area.

Our next Orchid species was completely out of the blue and was thanks to an intrepid Libbie and the local knowledge of naturalist Dave Thomas. We bumped into Dave at one of his favorite spots in Cornwall, the delightful nature reserve of Breney Common in mid-Cornwall. Like us he was there to photograph the recently emerged Marsh Fritillaries and as we enjoyed super views of this stunning butterfly we started to talk about our Orchid hunting. 'oh you know there's Common Twayblade here don't you?'. My brain pondered for a moment, 'What is a Twayblade?!,' 'Is it an Orchid?' Soon Dave had already answered these questions and more importantly the directions of where they were. The only problem being that I'm useless at listening to directions and for some inane reason I always find myself nodding to people and saying yes yes I know were you mean! When I don't have a clue where they are talking about! We also learnt that Dave hadn't seen them for 5 years or so (which probably meant 10!) so as we entered the stunted woodland I held little hope of finding any and after a few minutes I had given up. Not Libbie though! She was well in front and scuttling through the undergrowth like an intrepid explorer and soon her perseverance had payed off and she excitedly shouted over to me ' I've found some!'. It turned out after that Dave had left a stick as a marker for us to see on his way back that I probably stepped on and our colony was in a completely different place! Five down and five to go with plenty of time to spare. 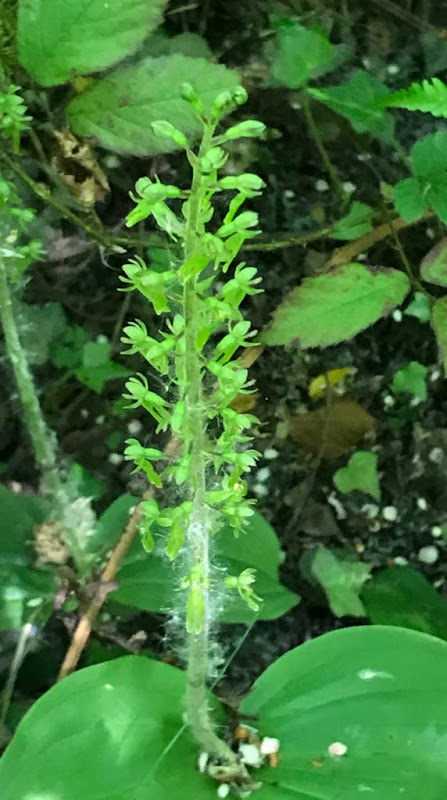 Common Twayblade is by no means common in Cornwall but I would imagine that if people searched for it more then new colonies would be found. Damp woodland with mature Willow seems to be a good place to start.

No Orchid hunting can be complete in Cornwall without a trip to Goonhilly Downs and the surrounding Lizard heathland. Many rare plant species can be found in this area of Cornwall owing to it's unique geology and unspoilt, uncultivated meadows within pristine heathland. Our quarry for the day was Heath Fragrant Orchid and Early Marsh Orchid. In the heathland habitat it didn't take too long for Libbie to find some Heath Fragrant Orchids amongst the many thousands of Heath Spotted Orchids. We then searched through some wonderful meadows which were blanketed in Wild Thyme and Ragged Robins. I searched and searched through the many Southern Marsh Orchids and the myriad of hybrid Orchids but couldn't find a pure Early Marsh (despite some stringy attempts which were rightly identified as hybrids by local expert Tony Blundon via Whattsapp). 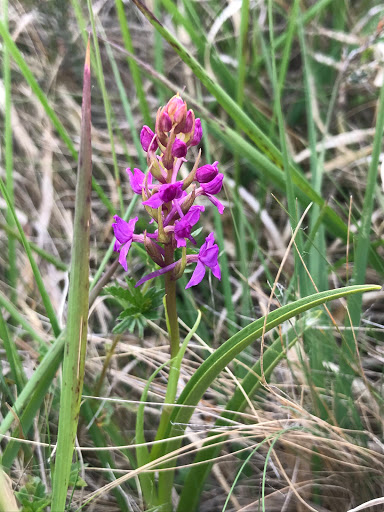 As I mentioned earlier Libbie has recently been given a great deal of help in her leaning of Botany by local plant guru and County Recorder Ian Bennalick. What Ian doesn't know about the flora of Cornwall probably isn't worth knowing and for me he is the perfect expert as he is willing to share his knowledge with others and is very friendly and approachable. I asked Ian about seeing any remaining Orchids and he soon sent me site maps of old records in the county for our desired species. Which was ever so helpful to us and also helpful for him in a way as it is one less area that he needs to check himself. Armed with the knowledge that in the past Lesser Butterfly Orchid could be found on Tregonetha Downs we searched the heathland high and low and almost gave up before Libbie spotted these delightful Orchids amongst bracken. 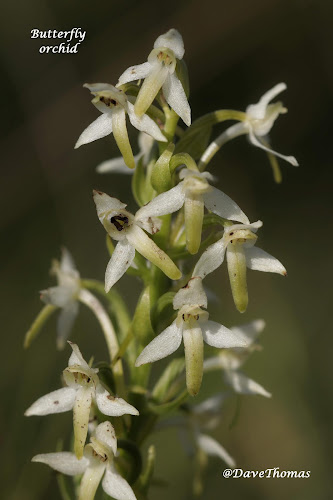 Sadly Lesser Butterfly Orchid is declining fast in Cornwall. It is not easily found at Tregonetha Downs but hopefully should be present again next year. We have also seen them well at Luckett Woods on the Tamar border.
One thing I have learnt about Orchid hunting and looking for special flowers in general is that road verges are actually a haven for wild flowers these days. Part of me finds this a little sad that they cannot thrive in our wider countryside and farmland but I have to admire this most unlikely micro habitat and it's importance to nature (being un-ploughed and usually pesticide free. Probably the best road verges in the county for plant hunting are around Hayle and Lelant in west Cornwall. Remarkably this is the best place to find Bee Orchid in Cornwall and after spotting many hundreds of Pyramidal Orchids and Southern Marsh Orchids (including the Leopard Orchid, a variety of Southern Marsh) we found these vivid Orchids hidden within the shade of Bracken , a surreal experience to enjoy so many wild flowers
as cars sped by at 50mph! 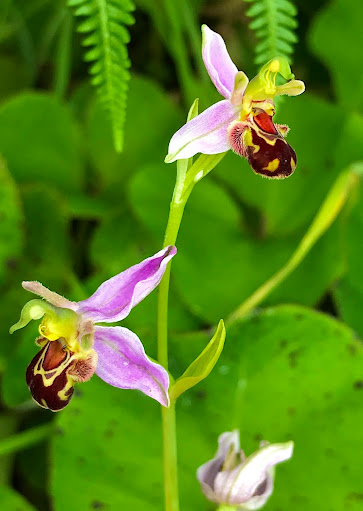 The best place to see Bee Orchid in Cornwall are the roadside verges of Hayle. We saw ours on the verge opposite the Old Quay House pub. 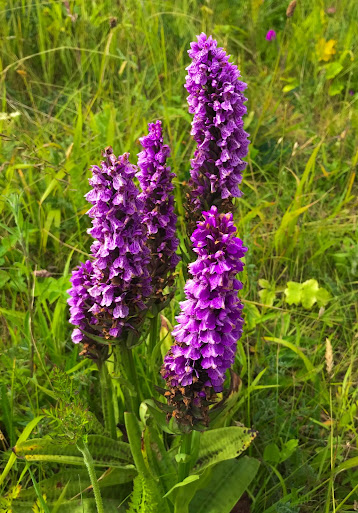 Leopard Orchid is currently regarded as a form of Southern Marsh Orchid. We saw them at Penhale Sands and the Hayle area. Basically a large Southern Marsh Orchid with spotted leaves and double loops on the inside of the flowers.
Penhale Sands is Cornwall's largest sand dune complex and extends from Holywell Bay to Perranporth. It is a well known site for it's rare Butterflies with thousands of Silver Studded Blues and small numbers of the critically endangered Grizzled Skipper. Botanically it is also a very special place with several species of international importance growing there. I was very lucky to be invited along to a small scale Bio Blitz led by Dave Thomas in the restricted military area which away from disturbance and well grazed by Rabbits is a haven for wildflowers. Along with experts Ian Benallick and Paul Gainey we were overwhelmed with rare plants (including Shore Dock and Early Gentian). The dune slacks here are home to the only colonies of Marsh Fragrant Orchid and Marsh Helleborine which we enjoyed in small numbers. The icing on the cake from a very enjoyable day was that we had now reached and passed our target of ten orchids in Cornwall! 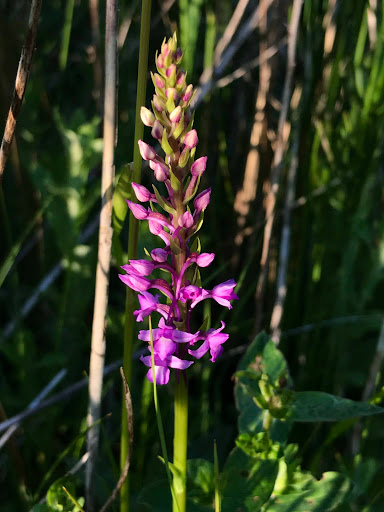 The only current site for Marsh Fragrant Orchid & Marsh Helleborine in Cornwall is Penhale Sands however searching other coastal dune slacks could well produce. Historically Marsh Helleborine was once found near Rock. 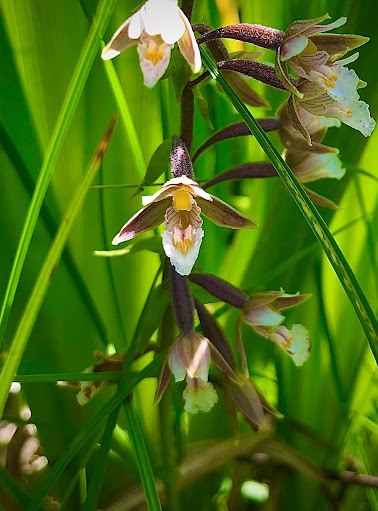 As August began we went to Indian Queens in mid Cornwall to search for perhaps the most westerly occuring Broad-leaved Helleborines in Britain! Again the area looked nothing special and it was right by the A30 as cars sped by at 70mph but Ian Bennallick (god knows how he found these back in 2017) had come up trumps again and Libbie's eagle eyes did the rest as we re-discovered 3 plants in amongst some scrubby woodland. 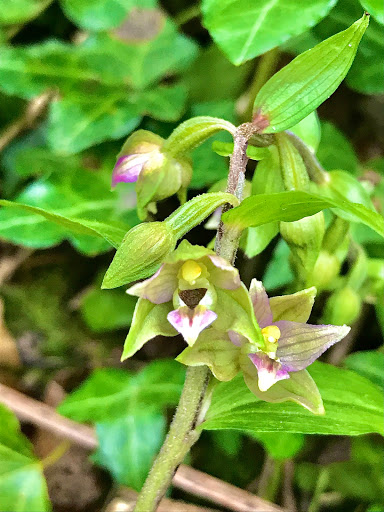 Broad-leaved Helleborine is usually found around the county border but it just shows that any area is worth checking for Orchids. 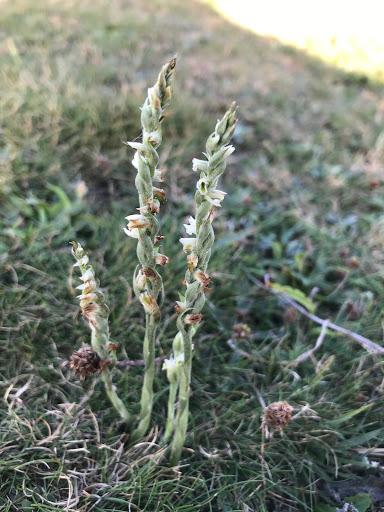 My photo's don't do Autumn-ladies Tresses justice. The neatly pleated stalks and subtle white Orchid flowers are a stunning sign that Autumn is arriving on the coast. They can be difficult to spot as they are very small plants but they seemed to grow around short areas of grass so once you get your eye in the twisted green stalks show up well. 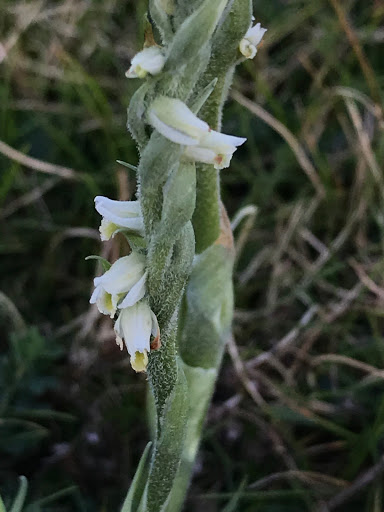 Our final Orchid for 2020 was hopefully going to be Autumn Ladies Tresses, a declining grassland species which can be found in patches along the coastline of Cornwall. Perhaps once it would have been found inland as well but changes in land management and loss of habitat has had a negative impact on this delightful mini Orchid. The first spot we tried was Cubert Common but we didn't have any luck at all, especially when a thunderstorm rolled through and soaked us! A second attempt took us to East Pentire near Newquay and aided with directions from Dave Thomas we were able to find 16 plants in a small area beside the golf course. It was a great ending to our summer Orchid hunt and with 13 different species we had an excellent year. Back to birding non stop for now though but 2021 will see the search continue for at least 3 species that we missed. Thankyou to Dave Thomas, Ian Benallick and Tony Blundon for their help with locations and their expertise.