You know birding and ringing have many directions in this day and age and I love the pace! So many different avenues you can pursue and so many surprises can be had in this modern age of internet, mobile phones and social media. From large county and national year lists to  worldwide birding and ringing opportunities at the click of a mouse button! Yet yesterday I had an encounter that bought some nostalgia and emotion that I have not truly experienced for a long time and made me reflect on why I choose to get up so early in the mornings and devote so many hours watching and monitoring the birds of Cornwall and beyond!


At Hayle Estuary located near West Cornwall I found a colour ringed Curlew. As many regular readers of this blog will know colour ring reading is a passion of mine and I never tire of the thrill of finding out where so many of our species originate from. I have had some surprises in the past of long distance migrations and I have also learnt an awful lot of the origins and lifestyles of many of our birds. Waders are normally the most fascinating of them all and can be from just about anywhere in the world!

It was great to get such a fast response from Tony Cross of the Curlew Country project informing me that it was the first ever recovery of one of there captive reared birds released in Shropshire! It was originally released at Stiperstones National Nature Reserve on 20th July 2018, yesterday it was located nearly 200 miles away in a flock of roughly 100 other (non-ringed) Curlews at Hayle Estuary. 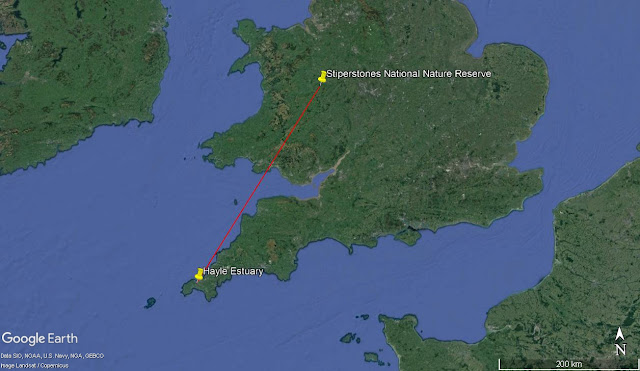 I was thrilled and decided to take a look at the project and find out why they had decided to captive rear Curlew.

I must admit that I am guilty of glazing over many posts found on social media and online forums asking for help or headlining as the next species we might lose and fear I had done the same with this one! Sounds harsh but it is so frequent now that I feel many projects get lost in the doom and gloom of an ever increasing plea for help and money! Each year the RSPB and BTO seem to be asking for help for a never ending stream of species and get caught up in red tape and bureaucracy and for me the practical element often seems lame when compared with the money raised. Now don't get me wrong I am not criticising the organisations, they must have so many employees that go home emotionally drained, contemplating the future of our wildlife and wonder if it would be far more effective to by a gun and dispatch the decision makers of this country! I am also aware of the many success stories that this country has witnessed and the people who are responsible for these conclusions deserve to be triumphant victors in such times of turmoil! So, with that in mind it was refreshing to see the approach taken by the Curlew Project team. I whole-heartdly feel that the approach they are taking is a pioneering one and is the key to making a real difference moving forward!

Local communities, society's and organisations could be the saviour of so many species if given the  right structure and instruction to work with. A worrying rift between the farming community and the environmental sector ( I use the term loosely) has formed in recent years, some difference of opinions are always going to be there as that is the nature of the beast. However, I live in a rural community and know that most farmers or people that rely on the countryside for their living are as concerned as the birders amongst us for the welfare of our natural world.

The Curlew Country website has a brilliant short film capturing the relationship between a retired farmer and the Curlew that use his farm and I would urge you to watch it here: Keeper of the Call Film

Tony Cross stated near the end of the film that this is merely putting a band aid on a wound that needs greater attention! That is the real dilemma and one that seems to be harder than ever to put right. But with the correct relationships and education I hope that the future will see the correct decisions being made and the chance for strong recoveries for many species in the UK.

For more information on the Curlew Country Project or to find out how you can make a donation please visit the following website: https://curlewcountry.org/

Last Sunday morning was my last trip to ring at Nanjizal for 2018. Always a bit gutting to think that the season is over but having caught just 18 new birds it felt right that the nets will be packed away for the winter months.

My ringing schedule in the County seems to work quite well. I am spoilt really as I have the opportunity to regularly ring at Nanjizal which is a fantastic migration route. But I also have my own regular patch, the Goss Moor which is one of the best locations in Cornwall for breeding species. I try to help out at Nanjizal a bit in the Spring and also do some ringing on the Goss Moor for the early returning migrants. I then switch my attention fully to the Goss Moor through the summer months to monitor the breeding species that reside there in June and July and into August. As Autumn kicks off the Goss Moor quietens down allowing me to once again turn my attention to assisting Kester Wilson at Nanjizal were large numbers of common migrants get ringed each season. As of today it is back to thinking about whats about on the Goss Moor and local vicinity's for the winter period! But not before some personal reflection on my encounters at Nanjizal this year!

To find out more about the numbers and sightings at the is the exceptional place; I urge you to read the regularly updated blog found here: https://nanjizalbirds.wordpress.com/

Ringing in Cornwall during the Spring months is exciting and rewarding. It always throws up a good bird or two and my year started well at Nanjizal with two Wood Warblers in April. They are sadly very scarce in the county nowadays with only a handful of records each year and have not bred since 2000. So to get two on the same morning was most welcome! 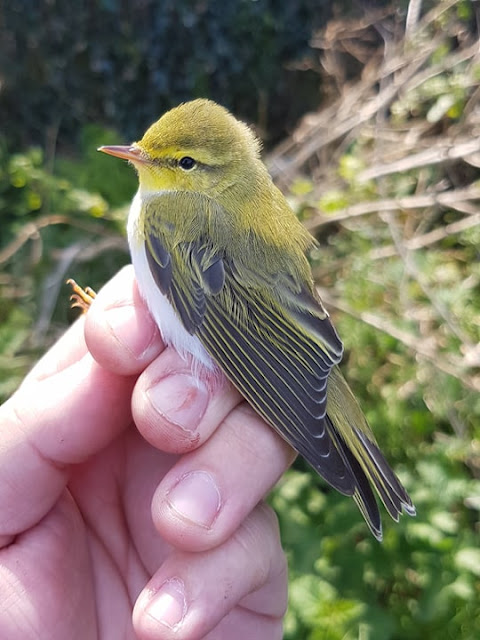 As more migrants started to arrive my attention turned to the Goss Moor once again. However a trip to the Valley on the 3rd of June did produce a Spotted Flycatcher which likely attempted to breed on site. Another bird that is becoming a much rarer breeder in Cornwall!

I did not return much to Nanjizal until the middle of August as the Goss Moor kept me out of mischief. However, amongst the large volume of passage migrants a "goodie" or two was lurking! On the 22nd I had my first taste of a local rarity in the form of a pristine Nightingale! An exceptional year for this species at Nanjizal and also in the county with at least 7 reports that I am aware of! They obviously bred well somewhere. The morning also produced my first Pied Flycatcher of the year which are always delightful to see.


The rest of the month seemed a bit of a blur and large numbers of common Warblers and migrants were processed as the weather permitted. Amongst them was a real splash of varied colours and species!

My biggest surprise happened on the 29th of August and will stay with me forever! I caught up with a lifer that I had longed and hoped for in Cornwall, especially being a ringer and regular at Nanjizal. After a reasonable morning for Sedge Warblers I was walking near a net that is set up for catching Locustella and Acrocephalus type warblers and contemplating how much longer I should carry on ringing as it had started to quieten down. My attention was drawn to a bird working its way through the low grass clumps and heading straight for the net. I held fire and watched as it flew out of the under growth and straight into the net and pocketed nicely. Naturally, I extracted the bird straight away suspecting another Sedge and was dumbfounded to see a large prominent gold central crown stripe! Finally, I had caught up with an Aquatic Warbler. I would have happily hung up my ringing pliers that day and gone out on a high, safe to say I was ecstatic! 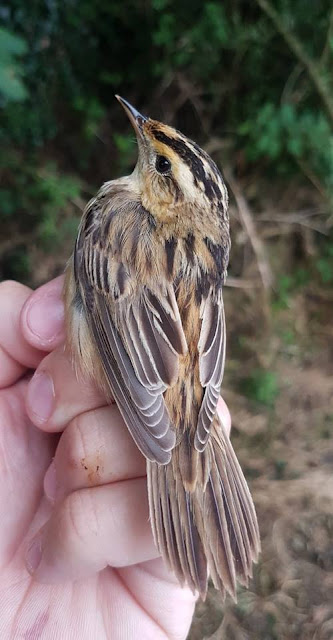 It wasn't just the nets that produced for me. Due to the location of the valley it also has a consistent stream of flyover migrants and over the course of the year I also encountered Ortolan Bunting, Richards Pipit, Serin, Glossy Ibis, Common Crane, Dotterel and Turtle Dove, that's just the ones that I nailed and many more probables and possibles have been relinquished to the back of my mind!

I know you shouldn't wish your life away but I am already excited about the prospects of next years visits to Nanjizal and what they might bring.