Mounts Bay Egret is it or isn't it?

I had heard some murmurings of an interesting Egret being seen briefly around Mounts Bay but not pinned down or its identification nailed! Rumour had it that it could be a Snowy Egret, the Nearctic version of our Little Egret if you will! A few days passed with no news and I have to admit that I hadn’t given it a second thought. I then received a message from Paul Ash and some photos of the bird in question that had been located again in Penzance Harbour prior to high tide moving it on again. The photos had me hooked! I ran them past Bob and a couple of other birders that I hold in high esteem and they all had the same feeling. This bird was eye catching and deserved some attention! So, what was so interesting? 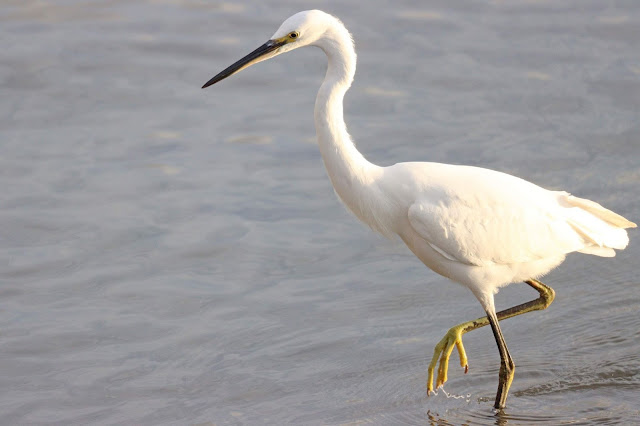 As you can see from the photos that Paul originally sent there are some striking features. Most notable was the intense yellow in the lore’s and the yellow on the back of the legs. Both good field characteristics of Snowy Egret on paper. Things were looking good in my mind but having only ever seen the species in Spring in America I threw caution to the wind and sought more experienced opinion. My first port of call was Kester Wilson who well and truly burst my rarity bubble! He was busy at work but gave his viewpoint that it was a Little Egret, “bugger” not the answer I had hoped for! A short while later another message came through from Killian Mullarney via Josh Jones. He also suggested that it was indeed a Little Egret! A real shame as I know that I wasn’t the only one that wanted it to be a Snowy.

Why was it a Little Egret and not a Snowy?

A species had been determined but I wasn’t 100% sure I fully understood all the field characteristics that made this a Little Egret. So, it was time to do the hard work and get the field guides out and Google fired up! Here is what I found out:

The obvious place to start with the Egrets is the head, bill and lore’s. In theory these should be pretty easy to see on both species as neither are particularly timid or skulky.

In the Little Egret, you will see a pale-yellow iris in combination with either a grey or a light green/yellow lore. In the Snowy both a bright yellow lore and eye is evident in non-breeding birds.

The crucial feature is the shape and colour of the saddle that extends over the base of the bill. This affects the shape made by the feathers approaching the culmen: being rounded/crescent-shaped in a Snowy, rather than pointy in a Little.

Eye colour is also important as the iris of the Snowy and Little Egret are different! The Little Egret will have a paler eye than a Snowy Egret. Not all birds have the exact same eye colour, especially depending on the lighting conditions! It is a common occurrence to encounter a brighter looking eye than expected. But used in conjunction with other identification features can aid a conclusion.

The head and bill structure also differ, and a Snowy Egret will show a slightly more petite appearance to the head and a stout, less elongated bill. The Little Egret forehead slopes more gradually accentuating its long-billed and long-headed appearance. Not so obvious on lone birds but being somewhat gregarious the opportunity for comparison will be possible for the patient observer.

The legs are another important feature to observe albeit can present some problems. A little prior knowledge of the pitfalls is useful.

Adult Little Egrets have black legs, with yellow feet. Snowy Egrets show not only yellow on the feet but yellow or a light greenish/grey colour trailing the back of the legs. If you’re able to establish that your bird is an adult, you can easily use this as a pretty reliable feature. However, you’d want to consider your verdict of both the lore and the iris, but if your bird has a bright yellow lore, iris and has light colouration on the back of the legs then it may be time to get on the phone to Birdguides!

The pitfall comes when observing younger birds! As a general rule the younger a Little Egret is, the lighter the legs are. Their legs become darker as they age. This is where it can become a little tricky, and there is still the possibility of a young Little Egret having light colouration on the legs, in conjunction with the typical black colouration. It is worth noting feet colour as Snowy Egret will always show golden yellow whereas Little's are drabber yellow-green.

Sadly it wasn't to be this time! But I for one am really pleased that this individual presented itself as for me personally, it was a really good learning bird. I certainly feel that if I was ever fortunate enough to encounter an individual in Cornwall I would now have a good chance of identifying it. I hope you can too? If you do remember to let me know first :-) !

Posted by Peter Roseveare at 13:54 No comments: