Perhaps 2020 has been a year to forget, but birding always throws up surprises (that's why I love it so much!) and this year was no exception. I didn't strike it big with any find in particular but my local area produced the goods for me, the north coast of Cornwall remains under watched but with a budding group of birders in the area I'm sure there is so much more to discover in this rugged part of Cornwall.

So in no particular order here are my ten most memorable finds:

1) Buff-breasted Sandpiper; Park Head. I had got into a routine of walking the coastal fields with Libbie in the afternoons in the hope of finding a Dotterel but I couldn't believe my eyes when my favourite wader strolled across the footpath in front of us, With an iconic setting you could sense this fab wader had just arrived 'in off' the Atlantic. Thankfully it stayed for a few days for others to enjoy too.

2) Wilson's Petrel x2; Trevose Head. The Cornish sea watching season was much better than 2019, with several reports of Pterodromas, Medeiran Petrel, Brown Booby and much better numbers of large Shearwaters, Despite work I managed some decent seawatches away from the crowds yet Fea's Petrel still eludes me! Highlight for me was finding two Wilson's Storm Petrel with Pete from my favorite spot at Trevose Head. We also had Long-tailed Skua, Pomarine Skua, Cory's and Great Shearwaters in a busy few hours.

3) Bonapartes Gull (1st winter) Padstow: The remnants of a hurricane (storm Dennis) - had just hit Cornwall, surely a Yankee Gull came in with it? That was what most birders were thinking in the South West and in challenging conditions in 60mph winds Pete and myself chanced our hand on the gull roost at Padstow. I've found most small gull species here down the years and yet again it came up trumps! A stunning 1st winter Bonapartes Gull that lingered a few days for the locals to enjoy.

4) Dusky Warbler; Porth Mear; Park Head: I got into a routine of checking Park Head early each morning throughout November. With fantastic habitat and being close to home it was great to re-learn a site that has so much potential. A showy and vocal Dusky Warbler was the first of a nice run of Eastern Passerines for me at the site and also a long awaited self found tick.

5) Dombrowski Yellow Wagtail: Davidstow didn't hit the heights for me personally this year and it was the first blank yank wader year for myself at least in a long time. However this fascinating bird which showed characteristics of this sub-species helped me sharpen up on Wagtail ID and I feel prepared for an Eastern Yellow Wagtail in Cornwall more than ever should I get lucky enough to have the chance of finding one.

6) American Wigeon; Walmlsey Sanctuary: It was a tough spring for Cornish birders. The conditions we dream for with settled weather and warm south easterly winds yet we couldn't get to the coast for obvious reasons until the end of the season. Still it is always nice to find an American Wigeon and a female is always a good bird to 'sort out' ID wise. After several gimpses over the previous week Peter and myself finally got the views of the underwing needed to confirm the ID.

7) Richards Pipit; Park Head: I do love vis-migging, migration in action at it's finest and my hearing has always been more acute than my eyesight so it is a facet of birding that I both enjoy and spend a large amount of time doing. We also found a Richard's at Porthgwarra in October but a bird on the North Coast and close to home gave me the biggest buzz.

8) Little Bunting; Park Head: The other star bird of Vis Migging this time shared with Pete on an early morning vigil. Little Bunting may not be the rarity it once was, but I bet everyone gets a big buzz from finding one like we did!

9) Common Nightingale; Nanjizal: The highlight of the ringing season for me was extracting and ringing a stunning fresh juvenile Nightingale at Nanjizal. Perhaps it wasn't the vintage year we hoped for at this mecca migration station but when you look back at the season and the birds we processed  (8501 birds) it is a pretty mouth watering list including Scops Owl, Icterine Warbler and Golden Oriole . As ever I feel very previliged to be a part of this long term project which proves that West Cornwall is an important area for migrant passerines and gives us a glimpse of the volume of birds which pass through our county. 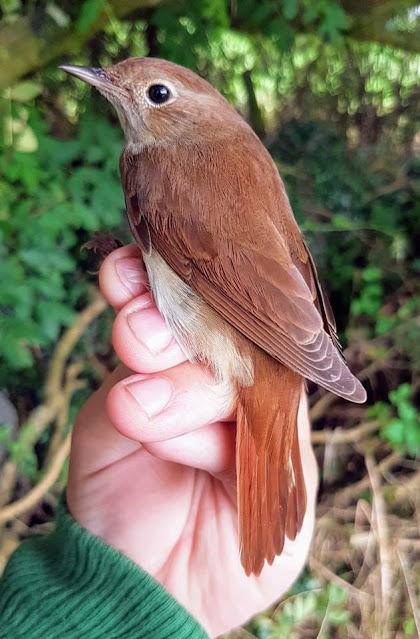 As a birder I thought I could identify Nightingale species by checking the color of the upperparts, brightness of mantle and tail and patterning of undertail-coverts & breast. However as a ringer I made a rookie mistake in not checking the wing formula (Common Nightingale shows a long P1 , short P2 and long P4. Thrush Nightingale has a short P1, long P2 and short P4). This would've been so easy to check and conclusive to the ID of any Nightingale in the hand. A lesson well learnt in my junior ringing career that if you process something different take the care as a ringer to do the proper biometrics and read Svenson.

10) Rose Colored Starling; Nanjizal: It was good to get in on the record breaking influx of Rosy Starlings in late spring 2020 and even better to find my first adult! I think because we spend so much time in the valley it really is amazing what flies overhead or is found by the Nanjizal Sunday Club during the year with Stone Curlew, Black Kite, Pallid Harrier, Citrine Wagtail, Short-toed Lark, Dotterel, Serin and American Golden Plover all recorded by the group on the Sunday's I was down there.